It was a beautiful weekend to enjoy the breeze under the big white tents as authors shared over two days at the 12th Annual National Book Festival on the downtown Mall in Washington, D.C. A favorite of the festival was Sandra Cisneros. Thanks to TCRWP, I am quite a fan of her short story, Eleven. So when it was question time, I asked her what inspired her to write it. She admitted that a similar incident occurred when she was 9 years old. Yet, it took her 30 years later to write it down and she did so in one weekend.

When a child asked her if she still feels like the character in Eleven, she admitted that “most of the time I am the happy 11 year old. But now I am 58. So I sometimes feel 58, 57, 56… and sometimes I am frightened and can’t speak up and feel 11 again. I am a shy person. I try to practice not being afraid.” When ask if she’ll run out of things to write about, she said never. “In one hour, you feel so much…so in a day…a week….so much to write about!!”

She treated us to her NEW story – Have You Seen Maria? WOW! It was SOOOO rich with descriptions, I felt as if I was right there as the characters searched the neighborhood for the lost cat and also right there feeling the loss of her mother. “I felt like a lost glove, left behind at the train station.” And that is just one of many, many, many descriptions. “Stories are like medicine. They come to us when we need them. This newest book will be the perfect gift for anyone experiencing grief.

I loved hearing how Mike Lupica became a young adult writer. When his son got cut for the first time from the travel basketball team in 7th grade, he decided to sponsor his own travel team, made up of all the rejected players. Once the successful season ended, he thought it could be a story, so he pitched it to his sports editor. And the product of this is his first young adult sports books, Travel Team. Now his 16th book is out – True Legend. All his books have the themes of friendship, teamwork, and loyalty.
His books are about different sports but the story lines are all about being a good friend and the experience of trying to do something great. The main character is knocked down (no talent is needed for this to happen) and then the story focuses on how the character gets back up. “I write about regular kids trying to be great.” 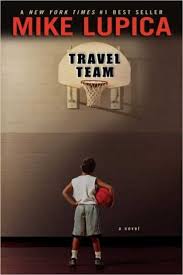 He stated, “Everything I write about in these books comes from my life as a parent with kids who play sports. My own kids will tell me if I have the dialogue right.”

“I got the idea for Heat in 1994. There was a baseball strike and the World Series was cancelled that season. I decided to go to the last game of the regular season and as I arrived at Yankee Statium, I noticed a group of kids playing soccer in the park next to the statium. I asked the person in charge if the kids would like to come to the game and I ended up treating 30 of them to the game. During the game, I asked how many of them had ever come to a game before and only 3 had. These kids live in the neighborhood around the statium, yet had never been inside to watch a game. That idea stuck with me and became the storyline of the book, Heat.

Mike Lupica is the kind of writer that writes the fiction story the way he wants it to turn out. The underdog sports player wins in the end! I want to use his books while teaching fiction writing. We write about what we know and we can also write the story of how we wish life really was!

LOIS LOWRY is an ALL-TIME FAVORITE OF MINE!!! She wrote The Giver and then received so much mail asking “What happened to Jonas?” While writing Gathering Blue, she decided to add Jonas so readers would know he was alright. Then she decided to make it a trilogy and wrote Messenger. But then she kept getting mail, asking What happened to Gabe? So she wrote Son and it is coming out in October!

Now it is a quartet! Son is the story of Claire, the birthmother of Gabe. Then it is the story of Gabe asking Jonas who is mother is. Then it is also the story of Gabe searching for his birth mother.She said when writing the character, Claire, she was reminded of a story in the news in 1975 that took place near where she lived in Maine. A family was camping and their son wandered off and a search began and after days, he was never found. As a mother, she couldn’t imagine just leaving, going home, without the son. How can a mother just leave and not know. This is how her character, Claire feels. What will she sacrifice to find her son? I can’t wait to read Son!!

Jerry Spinelli shared that he wanted to publish a book but kept getting rejection letters. So he would write another book and finally after having 4 books rejected, his 5th was accepted. Now he has written 35 novels for children to read. If he ran a school today, he said, he would ensure that there was a course called “Failure is My Friend”! His failures were like stepping stones. He reminded the audience that we cross the creek on the stepping stones of our failures. We need to NOT be afraid to fail.

When asked what inspired him to write Maniac Magee, he said he loved the song by Martha and the Vandels, Dancing in the Street. He loved the image of everybody getting together and dancing together in the street. And this idea, led to writing Maniac Magee.

Walter Dean Myers is the National Ambassador of Young Children’s Literature for the Library of Congress. He has written 105 books and at age 75, wakes every day and writes 5 pages. He said that in his books he tries to humanize the characters so the world can see more than just a poor, troubled, black person. As Ambassador, he is working to show: 1) illiteracy is growing in the USA and it is growing in proportion to the prison population; 2) Books can’t just be thought of any more as a pleasure. Books are ESSENTIAL; 3) Parents need to know that they should talk about books with their child.

Brian Collier is a passionate, inspiring author and illustrator!!

At age 4, his favorite books were A Snowy Day and Harold and the Purple Crayon. I looked like Peter and taking his hat off, I even looked like Harold!

Remembering how important it was for him to see himself in books, he makes books so kids can also see themselves in books. This is the case with his book, Uptown. He wrote about what he knows, his Harlem neighborhood in this beautiful book with collage illustrations. 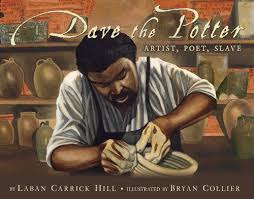 He also shared the background of Dave, the Potter. It is a book about a slave named Dave who lived 200 years ago. It is also a book about how Dave, because he learned (illegially) to read, he could dream of another world, making the book a strong story about the importance of literacy.

He realizes now that his grandmother gave him a silent gift – she made quilts, which are a lot like the collages he makes. She planted a seed. He reminded us to pay attention to the silent gifts – the things our family focuses on – as these are a part of us. What seed am I planting? What seed has been planted for me?

Patricia Polacco was the biggest ADVOCATE for teachers at the Book Festival. She struggled learning to read and finally at age 14, her teacher, Mr. Falker, helped her. Before she thought school was torture and that she was dumb. FInally, he got her help to deal with her dyslexia and read and get it. She celebrates her teachers in these books:

She said, “I thank the Lord everyday that I walk the earth with the most heroic of all species, TEACHERS!